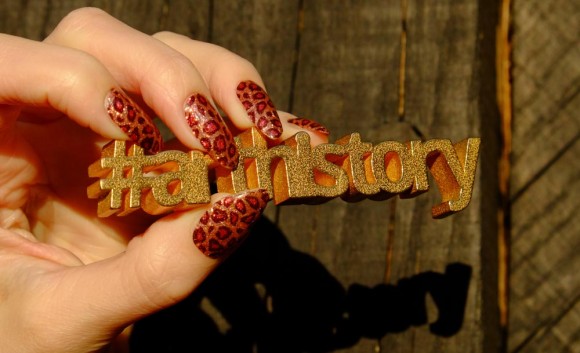 When I was in graduate school, one professor rushed through 100 slides in an hour, demanding that we remember the titleartistdate of each object he showed us. When he was finished he announced, “At first you will teach as you were taught, but then you’ll figure out who you are and teach as you.” I couldn’t tell you the name of a single object we looked at it in that class, but I can tell you exactly what I thought after he talked about teaching: “God, I hope not. I hope I start teaching as me right away.”

Fun fact: while taking that class, I was also teaching in a 100-seat lecture hall, speeding through 100 slides in an hour, asking that my students remember the titleartistdate of each object I showed them.

What does an art historian do when she can’t lecture? Everything but lecture.

I didn’t figure that out by asking other art historians. Instead, before I ever taught an online art history class I spent years working with faculty members to design classes in other disciplines. We worked together to figure out how to teach math, or economics, or biology, or Spanish. Working with these instructors was a huge gift, a way to see beyond the constraints of our discipline, to teach without relying on what Robert Nelson calls “a performative triangle of speaker, audience, and image.”  I saw students learn things by figuring them out; I saw students actively participate in — and make changes to — their own classrooms. These teachers even taught with the lights on, and their students could probably identify them on a crowded street.

When I sat down to teach my first online art history course (concerning modernity and the urban), I was sad to see it was already designed. Recycling and reuse  are common in the world of online learning. Worse, it wasn’t designed by a subject matter expert or an instructional designer. As both a subject matter expert and an instructional designer I had feelings about this.

I reworked the course as much as I could (and didn’t get paid for that).* I added materials from Smarthistory and the Met timeline of art history, videos about Kara Walker, links to news articles about Ai Weiwei. We explored the Flickr feed from Marina Abramovic’s The Artist is Present and read the Brooklyn Museum’s wiki about Judy Chicago’s The Dinner Party. Students wrote essays about contemporary memorial practices and followed the progression of the World Trade Center Memorial. They participated in a photo blog about public art and eventually thought about designing public art projects in group wikis.

My students became deeply engaged with art as it existed around them. Many of them lived in New York City so talking about modern art in the city seemed like a no-brainer, but some lived elsewhere. It was a nice mix, and we actually had discussions because I couldn’t/didn’t/wouldn’t lecture.

Overall, I’m not invested in online learning as a thing, I’m invested in it as a means to impact pedagogy and change our assumptions about power and classroom hierarchy. In an online classroom, my text doesn’t look differently than my student’s. I don’t write all in bold to make sure my students know what I’m saying is important. I try not to write too much. I respect the silence that can be hard to take in the classroom because I can think before I babble.

I work with faculty now, and we still write and record and edit lectures because many people still believe students want lectures and authority. I believe students get enough authority from reading Derrida or Marx and it helps when professors learn with them rather than teach at them.

Don’t get me wrong: I’m not opposed to the lecture. It’s an invaluable resource. It’s actually pretty awesome to listen to a person who knows what they’re talking about talk. It’s pretty cool to see someone geek out about an Aztec rattlesnake sculpture, or an 18th century chair, or an obscure detail in a Rococo painting. Lecturing is a fantastic way to show students how excited a person can actually get about something they might think is really insignificant.

It’s really nice to listen to someone talk for 10 minutes, walk away, check a reference the instructor mentioned, and get lost in a bibliographical loop. It’s great to see a pile of resources, an image gallery, articles, timelines, online walkthroughs, and explore them in the middle of the night, when you just can’t stop thinking about those horses in Cave of Forgotten Dreams and wonder if there was anything like that at Lascaux.

Self-directed learning is a beautiful thing. The moment someone took away my classroom and showed me the internet I realized there isn’t a test. There isn’t one for me as an educator, and I don’t have to give one to my students. There aren’t 100 objects in the world that are more important than any other 100 objects. Online learning shows my students and me the tangents and in-betweens still waiting to be discovered. Once we stop thinking linearly — once we move around a series of links and readings and pictures that may not add up to a discernible narrative — we are more likely to find them.

*I don’t really have time to go into the invisible labor of course design here, but I wish I did. I’ll leave it at one thing any good teacher knows: course design doesn’t happen because fairies show up and make a good class. Instructors design courses, online courses take more advanced planning than brick-and-mortar courses, and oftentimes instructors aren’t paid for that or are asked to sign away the rights for it. We need to figure this out, how to see course design as work, how to own our work, how to license it, and on and on. The labor issues of online education are very real and they should never be minimized.

5 responses to “Notes on Online Teaching, Part I”