Much as in the discipline of art history, the history of fashion has tended to focus on the stories and output of great designers, or the artists of our field. The privileging of these so-called “hemline histories,” however, has problematically been at the expense of stories that recount everyday dress practices and the fashion histories of the marginal, the non-Western and, perhaps most importantly, the non-White.

Speaking to this point, in a recent AHTR post my colleague and friend Kimberly Jenkins discussed how she has sought to unravel this bias through her digital humanities project, The Fashion and Race Database. By addressing “the intersection of power, privilege, representation, and aesthetics within the fashion system,” Kimberly wants to reconcile fashion’s “partisan,” and I would argue racist, worldview by making freely available a curated collection of documents, traces, and commentaries on the intersections of fashion and race.

Kimberly’s project could not be more apt or timely.

First during my M.A. at Parsons School of Design, The New School and later during my Ph.D. at the Centre for Fashion Studies at Stockholm University, I became all too familiar with the biases and blind spots that pervade the fashion literature. In seeking to reconstruct the early history of “plus-size” fashion—or what in the early twentieth century was charmingly known as “stoutwear”—I realized quite early on that I would face an uphill battle. While the future of plus-size fashion has become the subject of near endless debate as brands are slowly waking up to the fact that it’s a $21 billion missed opportunity, its past has gone largely unacknowledged. While I had discovered an elusive “gap” in the scholarship, I was not, however, entirely prepared for the extent to which the fat, female body had been written out of fashion’s histories.

At times the absence of the fat, female body in the spaces and places of fashion felt insurmountable; however, during tenure at the Centre for Fashion Studies, I came to attribute this lack to two separate but related biases. First and foremost, this neglect is symptomatic of the fact that fat and fatness remain under-examined topics of study within academia at large, which is itself the product of a number of complex and somewhat evasive factors. Indeed, as fat studies scholar Elena Levy-Navarro has speculated,

Some might consider fat a marginal identity category that is reclaimed by only a few on the radical fringe. Having no interest group worthy of note, fat is not a category worthy of critique, such academics might assume. Others might mistakenly consider fat a natural category that is merely descriptive and thus not to be considered with a critical eye. Others are perhaps simply too invested in the norm of thinness and the contemporary views of health to be able to interrogate the operations of power therein (2010: 1).

The absence of studies of fat and fatness within the academic literature may therefore in part be attributed to private stigmas and prejudices held by scholars who struggle to understand fatness as anything but an incontrovertible public health hazard. Thus, even as fashion scholars have sought to foreground and re-activate overlooked and marginalized histories, a history of large-size dress and studies of the dress practices of fat women may have seemed off-limits for academic inquiry. Although the field of fashion studies has historically encouraged incisive, curious and critical approaches to the study of fashion, it is not entirely unaffected by the fashion industry’s hierarchies and value systems. Indeed, within academia, but specifically within fashion studies, fat is perhaps the other “F-Word” (Steele 1991). 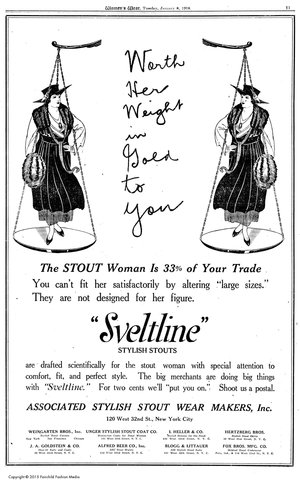 The term “plus size fashion” didn’t come into use until the 1980s. In the early 20th century, it was referred to as ‘stout wear,’ and the woman was referred to as a ‘stout woman.’ But, those weren’t neutral terms in their time, either and sparked active debate.

Second, the material record of large-size women’s dress is scanty at best, and non-existent at worst. Indeed, a survey of historical fashion and costume collections yields little insight into the dress practices of larger women since these objects simply have not been collected or conserved, or, conversely, have been misinterpreted. This lack is due to a number of institutional, political and practical reasons, which underscore the fact that the archive is a space of power and a microcosm of social and cultural values. By turn, this material absence has led, quite problematically, to a deeply entrenched survival bias within fashion and costume collections, which has only recently begun to be redressed via a number of notable exhibitions, such as Associate Curator at the Museum at F.I.T. Emma McClendon’s exhibition, The Body: Fashion & Physique.

In spite of fashion’s bias against fat bodies, I nevertheless managed to complete and successfully defend my dissertation titled “Stoutwear and the Discourses of Disorder: Constructing the Fat, Female Body in American Fashion in the Age of Standardization, 1915-193” in May 2018, which is available to download and read in its entirety via Stockholm University’s library. In order to complete this research, I adopted Michel Foucault’s archaeological method, or a method of looking for traces of the fat, female body in places that tend to be overlooked by fashion historians, such as trade journals, style guides and historical fashion textbooks. For my secondary research, I similarly adopted a method of reading alongside the few published cultural histories of fatness, which tend to frame fashion as frivolous and ancillary to the history of the fat body, and in parallel to extant histories of Western fashion, which as has already been discussed have neglected the fat body. By embracing these gaps and absences, as well as the inherently interdisciplinary nature of fashion studies, I adopted what Charlotte Nicklas and Annabella Pollen have described an “ad hoc” approach adopted by many fashion scholars who are turning evermore “to unusual or unresearched historical sources…[reflecting] the convulsions that history, as a discipline has undergone in recent decades” (2015: 2).

While my dissertation (and soon-to-be book!) partly reconstructs the history of plus-size fashion, there is nevertheless a wealth of literature that, although perhaps somewhat outside of the fashion studies canon, nevertheless provides ample opportunity to consider the relationship between the power, fatness, identity and fashion. In the vein of reinserting the fat, female body back into fashion history and in following in Kimberly’s footsteps with her Fashion and Race Database, here, I present some of the titles that proved most useful to me throughout my research and, which may prove useful to you, too, either in your own research or in your teaching. Although this bibliography is far from exhaustive, it nevertheless offers some insight into the inherently interdisciplinary nature of fashion research, as well as the nimbleness required of the fashion studies scholar. For ease of reading and reference, I have organized the titles into four categories: “Histories of the Body and Fatness,” “Fat in the Fashion Literature,” “Theorizing the Fat, Female Body” and “The History of Standardized Sizing.” 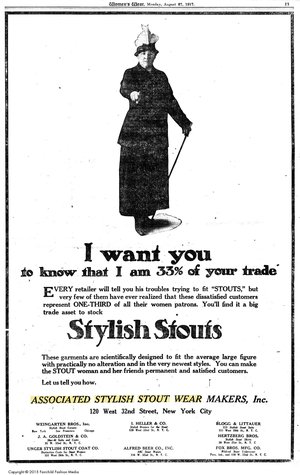 Histories of the Body and Fatness:

Fat in the Fashion Literature:

The History of Standardized Sizing:

Questioning The Ethics Of Required Textbooks