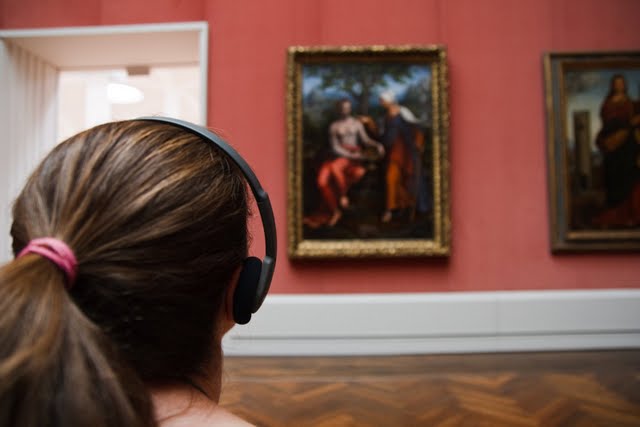 Last semester I restructured my Modern Art survey to integrate a number of new technologies with the goal of encouraging more active learning in the class.  To update the writing component, I developed this audioguide assignment, based on a traditional formal analysis paper.

This post focuses on the design, objectives, and logistics of the audioguide assignment.  I’m also sharing my assignment details, timeline, and grading rubrics if you want to adapt or build on the project [see end of post]. AHTR’s been nice enough to let me write twice, so next month, I’ll offer a more reflective account of what went well, what did not, and the results of our assessment of the project.

The audioguide assignment supported key course objectives involving object-based learning.  The primary goals were that students would learn to

1)   recognize how working with a primary object in a museum context is different from viewing a digital or print reproduction;

2)   use oral and writing skills to communicate visual (and other sensory) perceptions in a clear and critical way;

My original plan had been to assign video podcasts.  I chose audio instead because I thought students might better hone their use of language if they didn’t have an image to fall back on.  The familiarity of the audioguide model also helped excite them about the project.  Most had experience listening to museum audioguides, so the project suggested a practical application of their academic study.

This led to a secondary goal involving learning to speak to different audiences.  I wanted the students to produce a sophisticated formal analysis appropriate to the academic context; but, I realized the project would be most useful if they could then translate these ideas to a general audience.

Structuring the project was the challenge.  Aside from concerns about grading and supporting 34 technology-based projects, I wasn’t sure how challenging or time consuming the production process would be, so a collaborative approach to the audioguide seemed most practical. Pedagogically, however, I wanted students to develop their individual skills in visual analysis and writing about art. My solution was to frame the audioguide project as a two-part process.

The project began with an individual writing assignment, based on written formal analyses and peer review activities that I’ve traditionally assigned in the class.  Each student visited the National Gallery of Art and chose a first and second-choice object as the topic for their paper.  I organized eight peer groups of 3-5 students based on their selections.  For example, several students chose the same painting, so grouping them together for the peer review revealed to them that multiple approaches were possible. Another group wrote about nonobjective paintings. Since abstraction requires a different type of descriptive and analytical language, they were poised to help one another even though each had addressed a different artwork. After exchanging drafts of their papers for peer review from their groups, they submitted final versions to me for grading and feedback.

Peer groups then continued to work together on the audioguide production, picking one object for them all to focus on for the final product. Groups where everyone had written about the same object used it as the subject of their audioguide.  It was trickier for other groups, who had to choose from among the different objects each had written about.  The most successful projects focused on an object that at least two members had discussed in their papers.

Students began pre-production by writing a script.  The students had watched Smarthistory podcasts throughout the semester, so we based the audioguide on a similar model of conversational interpretation.  I gave them a list of prompts to consider, and we discussed my grading rubric for the project in detail.  Although Smarthistory’s guidelines discourage scripting, I found this component was necessary to ensure a thoughtful synthesis of ideas, and to help students feel more prepared when recording.

And, I wanted to maintain some oversight of the students’ process.  The groups worked collaboratively in Google docs.  I required they share drafts for my review and feedback, and many chose to meet with me personally to discuss the subsequent revisions.  Developing the script proved the most difficult part of the assignment for many groups.  They found it challenging to present information in a more informal tone and within the 3-6 minute limit.

Whenever assigning collaborative projects, I have students take on specific roles in their group.  Thus, even though they work together throughout the process, each has clear ownership of a specific component.  For the audioguide, they chose from

Scriptwriter, Audio editor, or Director/Producer (who created a log documenting the group’s working process, explaining problems encountered along the way, and why they opted for certain solutions).

For the audioguide, most students used Sony MP3 Digital Audio Recorders and interview microphones.  They made their recordings in sound rooms at Georgetown’s Gelardin New Media Center, and then transferred recordings to their personal computers for editing with Garageband.

Georgetown has a great resource in Gelardin, so their staff provided technical support for the class.  I had someone come speak to the class, and they held a one-hour workshop on Garageband editing software.  Not all students attended, but most groups chose to send one representative. (Here’s a great link to Gelardin’s how-to guide for audio projects, including all sorts of techy details!)

Student audioguides were presented on the last day of the semester.  I had each group email me MP3 files in advance of class.  After listening to each audioguide, each group addressed specific questions or comments from other students.

Additionally, each student submitted a binder that included

1)   a copy of their graded formal analysis

2)   a one page personal reflection of the assignment process

I relied on rubrics to grade each component of the project.  Likewise, students were given rubrics to use in assigning grades for each member of their peer group.

The final project grades were weighted as follows:

5%  Teamwork (determined by the students in each group)

Ultimately, the audioguide project offered students a way to create their own contribution to art historical practice and public understanding.  Although many of them were apprehensive at first, their feedback was extraordinarily positive upon completion of the project.  I was frankly overwhelmed by the quality of their final products.  Next month, I’ll follow up on these points and talk a little more about the student’s responses to the project, the lessons I learned, and how the project is currently developing in my class this semester.

Leave a Reply to A little more about the Student Audioguide Assignment | Virginia B. Spivey, Ph.D Cancel reply