Ancient Roman art history is particularly fertile material for arguing the continued relevance of ancient art to students, offering teachers opportunity to answer the perennial question: “Why should I care about this?” Or, otherwise stated, “What does this have to do with my life?” Chances are, the building you’re sitting in, or some museum or civic building your student has ever been to borrows elements of Roman architecture. A Roman art lecture might begin with a discussion of political terminology (parse out the terms democracy, republic, oligarchy, monarchy, and empire). Then bring up the political legacy of Rome in the United States, seen in our representative government, our system of checks and balances, the veto power of the President, and perhaps even in the global reach of American influence. The Metropolitan Museum’s Resource for Educators will prepare you to discuss Roman political beliefs and their continued relevance. 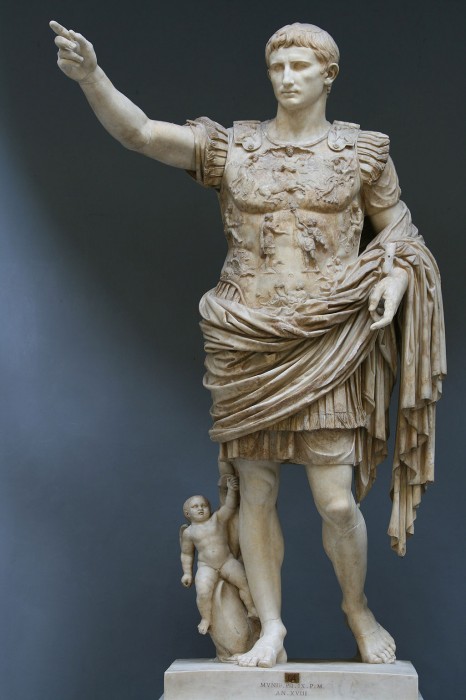 For architectural background, see this simple tutorial on the Roman use of concrete for civic building projects and video from Professor Diana E. E. Kleiner’s Introduction to Roman Architecture from her Open Yale course. For a discussion of portraiture, the Met’s article on Roman portrait styles—their toggling between idealism and realism—is recommended. The PBS website for the series The Roman Empire hosts teaching resources and video clips relating to the early Emperors of Rome, and Professor Mary Beard discusses Imperial portraiture in her A.W. Mellon lecture series at the National Gallery.

Previous lectures in the survey may have highlighted the relationship of art and religion in ancient societies, but this lecture—in addressing Republican realism, Imperial art, and civic building—looks at what happens when art is brought to the service of politics. As a secondary goal, teachers can trace a crucial evolution in architecture toward construction techniques that were cheaper and easier, and that shaped space in new ways.

The timeline covered in this lecture begins with the period of Etruscan and Roman kings in the ninth–eighth centuries BCE, and moves through the Roman Republic (509 BCE) and the Roman Empire (27 BCE) to the reign of Constantine, and his transfer of the capital to Byzantium in 330 CE. Because the Byzantines spoke Greek, were officially Christians, and blended many cultures from around the Mediterranean, we might consider their culture distinct from the Roman. In the West, around Rome, successive waves of so-called “barbarian” invaders arrived as the Roman Empire fell into decline in the fourth and fifth centuries.

You might begin with some images of Ancient Etruscan art, noting that theirs was a related yet distinctive culture in Italy from 800-400 BCE, and not simply a prelude to the Roman. Vitruvius’ description of Etruscan temples in his Ten Books on Architecture (20-30 CE) is a great prompt for discussing how we know what we know about art from antiquity—from a time before cameras, digital recording, and even printing presses. He projects Roman ideals of beauty, based on function, strength, and human proportions, back onto Etruscan architecture. At that writing, Vitruvius was already looking five hundred years into the past. Although their square temples were built, much like Greek ones your students may have already seen, on platforms using post-and-lintel construction, the Etruscans also used the arch (like the Romans would) to build a barrel vault in at least one instance.

When discussing the life-size terracotta sculptures that surmounted those temples, like the Apollo of Veii, encourage students to think like artists: what might be the technical struggles of working with the material? Imagine trying to maintain the shape of a giant lump of wet clay! Have students compare this work to the contemporary Kritios Boy (Greek, 480 BCE) to find reasons why our Apollo here is certainly NOT from Classical Greece (posture, clothing, proportion, etc.). He does borrow aspects from archaic Greek kouroi as well as Near Eastern art. The Etruscans probably knew of these cultures through their continuous trading of natural resources and goods in the Mediterranean. Apollo’s active, almost off-kilter pose represents well the characteristic, fresh liveliness emblematic of Etruscan sculpture, found even in funerary works like the Sarcophagus from Cerveteri.

Like the Etruscans, the Romans assimilated many Greek artistic and building practices, along with the Greek state religion. The Roman religion came to include a more personal worship of ancestors and deified Roman rulers. Rome and Greece, nearby geographically, were mutually aware of one another for centuries before Rome conquered Corinth (in Greece) in 146 BCE. Victors of battles brought Greek objects, architecture, and beliefs back to Rome even earlier in the third century BCE, where Greek culture would become popular among the locals. Romans were also, however, tremendous innovators: they created their own language, Latin, and developed more practical architecture than their predecessors. Artistically, they nurtured Greek humanist naturalism into astounding feats of realism.

Consider building up diagnostic terms like “realism” slowly. You may have introduced “stylization” with the Near East, “idealism” with the Egyptians, and “naturalism” with the Greeks. With those touchstones in hand, students will be prepared to differentiate the term “realism” in the Roman lecture without becoming overwhelmed. Pairing that with the term “verism” can be helpful if you explain that the prefix “ver-” stands for truth (veracity, verify, very). So a realistic sculpture tells some truth about a person, potentially beyond their natural appearance, that can lead to defining a “portrait.” The Romans’ history of ancestor veneration and their making of death masks contributed to their love of portraiture. You might show the class some death masks of celebrities like Beethoven or Alfred Hitchcock, or find others here. Does a portrait have to be veristic? We shall see.

The bronze sculpture of Aulus Metellus is a great introduction to Roman Republican values of wisdom and authority. Consider why an orator or senator is not depicted in the Greek manner, nude and athletic. Or consider how portraiture can be related to propaganda. There is so much specific information about his age, class, and even vocation encoded in Aulus’ face and hairstyle—not to mention his name at the hem of the garment. Students may be able to guess at his role in society simply based on his gesture. Point out the way that gestures communicate with a contemporary portrait of President Obama. (He often smiles and crosses his arms at the same time: “I’m stern, but approachable.”) Photos of Obama standing in front of the Capitol building give you an opportunity to segue into why the early Americans chose the Roman mode for their government buildings.

Rehearse the markers of verism on the bust of Pompey the Great. The frank likeness, with its close-set eyes and paunchy chin, seems difficult to reconcile with the historical memory of such a powerful man. For all its honesty, Pompey’s portrait also manages to affect Alexander the Great (and all the associations of epic leadership) with its tousled locks. Pompey’s greatness comes up in the first few pages of Shakespeare’s Julius Caesar. That story shifts the lecture to the genesis of the Roman Empire.

With Empire came emperors, and with emperors came an increased idealism in portraiture. Augustus of Primaporta floats somewhere between the veracity of his military uniform (the leather breast plate and skirt worn by Roman warriors) and the divinity implied by his bare feet. Augustus’ particular haircut with forked bangs identifies him in all of the sculptures and coins made during his reign, so this is still a kind of portraiture. He also takes on the gesture of the orator that we saw in Republican sculptures of senators. But lest you think this is the realistic portrait of any ordinary man, Augustus here stands in the contrapposto of idealized Greek athletes and gods, and the Cupid at his calf reminds viewers that Augustus claimed descent from Venus, Cupid’s mother. This association was important as Roman Emperors declared divine right to rule and held status as gods themselves.

Wall paintings from the Villa of Augustus’ second wife Livia prove that the Roman interest in realism (here, naturalism and idealism, too), went beyond the medium of sculpture. The painting, designed to melt away the walls of Livia’s dining room into an elegant garden landscape, uses atmospheric perspective. Any system of perspective tricks the human eye into seeing three dimensions (length, width, depth*) where there are really only two. This illusion banks on the fact that the atmosphere is not actually transparent. Ask your students to imagine standing on a mountain, and to describe a far away village. Things further away are less distinct, and colors are duller. And things far away appear smaller. Atmospheric perspective reproduces that phenomenon of vision with paint. A few Romans may have been aware of linear perspective, but most attempts, such as that at the House of Publius Fannius, seem wonky and intuitive.

They may not have been able to create believable paintings of architecture, but the Romans could certainly build! The Romans began widespread use of the arch for civic building projects like the Pont du Gard aqueduct during the Republican period, and the emperors used public projects to gain popular favor. You can discuss the necessity of infrastructure to empire building. To demonstrate the simplicity and genius of self-sustaining arch construction you can stage a simple arch-building contest between two students with inexpensive wooden blocks made for the purpose. You can even try this project using potato blocks. Students can also sketch an arch with voussoirs into their notebooks and trace lines of thrust outward and down from the keystone.

The Arch of Titus is purely symbolic architecture that is completely freestanding. Point out the elements (attached columns, coffers, the arch itself) that originally functioned to support buildings but here serve to glorify the Roman emperors as symbols of military triumph. Remind students that the tradition of the triumphal arch extends back in time to the (functional) Ishtar Gate and forward to nineteenth-century arches like the one at Grand Army Plaza in Brooklyn, NY.

The Pantheon, built to honor “all” (pan) the Greek-turned-Roman gods, might epitomize for your class the Roman religious building during the Empire. It combines a Greek porch supported by columns and topped by a triangular pediment with a round, domed space behind. Rectilinear Greek and early Roman temple building gives way here to the curve in this massive, domed building. But “Roman concrete”—a pourable, moldable mortar of lime or gypsum, volcanic ash or rubble, and water—is the star here. It allowed the Romans to conjure an airy sphere within perfectly round space. Square coffers lightened the weight of the dome and symbolized the orbits of the celestial spheres. Photographers often try to reproduce the experience of that building with various techniques and lenses. Contemporary artist Thomas Struth has been successful as a photographer of museums. Students love to respond to his (very expensive) photographs of museified ancient architecture and visitors looking.

You may end the lecture with Constantine and the shift to the Eastern Roman Empire, without going into Byzantine Art. The Colossus of Constantine swings toward the pole of idealism. Way larger than life, the sculpture’s eyes look toward heaven, and its features are bold and youthful.

Although much is made of the republican legacy of Rome in the United States, you might also discuss the issues of empire (tolerance, citizenship, and slavery, for instance) and European/American imperialism and global intervention. Have students read the article at BBC History, “Empires of the Absent Mind: Rome and the USA,” and write two responses to be used in a debate. The first should compare the policies of superpowers Rome and the U.S. and critique them; the second should equally defend them. During the next class, you can divide the class into pros and cons and referee a debate. A good argument should always consider the opposing opinion.

Christina McCollum (author) is a PhD Candidate at the CUNY Graduate Center.