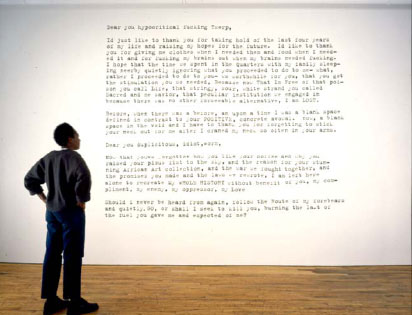 Most of us have had some experience teaching with art “in the flesh” – in museums or galleries – rather than our usual fallback of classroom Powerpoint, OIV (Offline Image Viewer, which is ARTstor’s presentation technology), or Prezi presentations. And we often send students to a local museum or university gallery to write responses of one sort or another, giving them direct access to the original artwork. But in my undergraduate Museum Studies class this semester I wanted my students to consider the variety of ways that text can be used to introduce, augment, and/or constrain our response to the original object.

Over the course of the first half of the semester each student had to compile a Museum Object Portfolio. The first job was to choose a museum object and I was delighted by what they came up with, ranging from traditional art works to several items of clothing and an illustrated book. We discussed a number of articles and book chapters about museum text panels, including Beverly Serrell’s Making Exhibit Labels (1983), Eilean Hooper-Greenhill’s “Language and Texts” (in E. Hooper-Greenhill’s Museums and Their Visitors, 2013), Elizabeth Gilmore and Jennifer Sabine’s “Writing Readable Text: Evaluation of the Ekarv Method” (in E. Hooper-Greenhill’s The Educational Role of the Museum, 1999), and Gail Gregg’s “Your Labels Make Me Feel Stupid,” so students got a good sense of the practical, pedagogical, and psychological impact of different approaches to museum text.

They began by turning in the “tombstone,” or basic identification label, and a wall panel for their objects – a short assignment, no more than a page, but one that required a lot of thinking about the text as an intermediary between the audience and the object on display.

The next component, due a week later, was a set of instructions for docents. This had to include:  1) a series of bullet point highlights that the docent should cover by the end of the 10-12 minute session in front of the work; 2) a series of questions that could be used by the docent to elicit relevant and meaningful discussion, along with the response (or various responses) that the docent might get from the visitors; and 3) another series of questions that visitors might ask about the piece, and suggested responses to those questions.

A week later each student turned in detailed plans for a Family Corner, with these instructions:

Tape two sheets of unlined paper together to make a corner, and design the layout of the Family Corner. Where would you place the object (or a reproduction of the object)? Would you want additional photographs or reproductions – e.g., of details, or of comparative works, or of contextual material? If so, where would they be placed? What text or other elements would you have on the walls of your Family Corner? Indicate where they would be placed (e.g., by rectangles that are numbered or lettered and that correspond to the actual text in your packet).

There would also be a table and several chairs in your Family Corner. What would you

want on that table? Books? Games? Exercises? Puzzles? If so, what would they be?

What you will turn in is the 2-page wall layout, the list of materials for the table, and a packet that gives the specific text information as well as any exercises or games that you’ve come up with to help engage children (guided by parents or other adults).

Their final assignment in the portfolio was a scholarly catalogue entry. I asked them to conceive of this entry as part of a catalogue for the museum’s permanent collection, or for a special theme-based exhibition, and to imagine their audience as well-educated and relatively sophisticated middle- to upper-class adults (the likely buyers for such catalogues).

I responded to each of these components in draft form so the students had time to revise before turning in the final, complete portfolio. Many of my comments had to do with their use of language, as I wanted them to think carefully about the specific targeted audience in each case. I also encouraged them to explore alternative ways to hook the museum visitors into spending meaningful time with the objects. Who might be attracted by emotive or affective language, and who might be turned off? What might entice children, and what might they find boring? What would teenagers find exciting, and what would they consider silly or demeaning? What kind of information and language is appropriate for what particular context, and what compromises must be made with the kind of short wall label that has to appeal to a wide range of visitors?

This assignment was not only a challenge for my students, requiring them to think about museum objects from an entirely different perspective, but it was also remarkably fun for me to read. Win-win!