Feminist art history has two meanings: the study of feminist art made from the late 1960s to the present and a revisionist reading of the history of art to examine women and their images and involvement as artists and patrons. I want to consider the second version here to clarify what a feminist revisionist reading is and how to do one.

Despite the reality of women’s involvement in the history of art, their contributions were marginalized if considered at all. The statistics and situation of art history were skewed away from examining women artists and their activities and even representations of women’s experience. As one example, H.W. Janson’s History of Art did not include any women artists in the first edition. Now, this painting by Clara Peeters is illustrated in full color and there are about 750 words of text discussing it. Suddenly, women artists came into existence who had largely been lost to history. 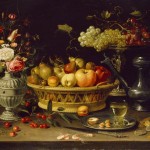 Exclusion of women artists occurred because of a gender bias or because the mechanisms used to assess art ignored the ways women made art or could make art. This point is an important one to grasp. The idea of the art world as a meritocracy remains in wide circulation, despite all indications to the contrary. There simply has not been equal access to the means of production for women artists to work on the scale male artists did. Or their aesthetic differed from the generally accepted features of a period. The paradigm began to shift when women became art historians in larger numbers by the mid-1960s

What’s exciting about this method is that it helps you think about an artwork from a wider frame of reference, thus complicating and expanding the canon in interesting ways. Students usually respond well to a feminist revisionist reading. They are able to connect more to the experiences of people, situations, and iconography of cultures throughout history or in faraway places. The resemblance they see between their life experiences is often more evident as is learning about the ways people lived in the distant past. I say usually here because if you call it a “feminist revisionist approach,” you will most likely lose them. The word feminism is loaded these days. Some students embrace and seek out opportunities to discuss and study gender and identity issues. While other students fear feminism because they do not understand it. Feminism is equality and access for women. This concept is one which most students support almost without question because they are acclimatized to its principles and tenets in their daily lives.[i] However, many students shy away from labels, while others don’t like the activist and revolutionary components of feminism.

When you read art from a feminist perspective, you are identifying previously diminished or disregarded components of an artwork. As an example, the western tradition of marginalizing sexuality in art—principally a requirement of the church—means that privacy and private acts were shifted away from view. Since the domain of women was largely the home, their roles, and by extension images of them, were limited. When reading art from a feminist revisionist perspective, you are calling attention to minimized, dislocated aspects by using a fresh approach. You aren’t decrying the discipline in its traditional form, but bringing new interpretations which enliven the art.

How do you teach from a feminist revisionist perspective? See if you are able to answer some or all of these general and overarching questions about the art in any period of history you cover in the survey course.

“The personal is political” was the clarion call of the women’s liberation movement, or second wave, at the end of the 1960s. Using feminist revisionism is a way to expand significantly how you consider art and how your students will too. For the survey level student, such an interpretative model can help engender meanings in art more directly connected to the personal and the private and provide a more accurate portrayal of women over time. It can be interspersed throughout a course, restricted to a single session, or used as a topic of class discussion. These questions could provide a framework for such a conversation.

One response to “Teaching from a Feminist Revisionist Perspective”