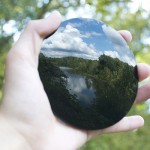 Art and the Environment is a 400-level course covering a broad expanse of time, from prehistoric art to recently completed eco-art projects. A portion of the course is devoted to studying the representation of landscape as a reflection of the concerns and issues of the times in which they are made. Last semester, I piloted a series of integrated active learning assignments that provided historical perspective, contemporary relevance, and local significance.

After an overview of the development of European landscape painting in the 16th and 17th centuries we watched a 2003 documentary film, Dutch Light. The filmmakers, Pieter-Rim and Maarten de Kroon, were inspired by Joseph Beuys’ assertion that Dutch light, the light in 17th century Dutch landscape paintings, had ended in the 1950s when the Netherlands completed the construction of an enormous 2,000 square kilometer polder by reclaiming land from the Zuiderzee, a North Sea bay. Described by Beuys as a mirror and the “Eye of Holland,” he believed the Dutch had blinded themselves when the sea was transformed into land. The film includes multiple and conflicting points of view through interviews with art historians, a curator, three artists, a meteorologist, and an astrophysicist. Concerned that we have largely lost our sense of subtlety, the filmmakers included multiple segments in which the camera pans 360° slowly across a Dutch landscape. I showed the film in 30-minute segments over the course of a week leaving ample time for in-class discussion and questions. At the beginning of the week each student was given a Blue Book and directions to spend ten minutes a day, quietly and without digital distractions, outside for five days observing the light and writing descriptions of the it and its effects on the forms and objects around them. 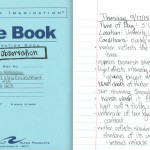 I had several reasons for making this assignment: to get the students outdoors; to provide them with an opportunity to engage in slow looking; to help them to see what happens when they are removed from digital distractions, even for short periods of time; and, to encourage them to apply what they were learning from the film. In their responses many confessed that they did not initially understand what they were supposed to be doing, but that it began to make sense over the course of the week. Several said they enjoyed being “forced” to do something they wouldn’t do on their own. One common pattern that I found in their observations was that they shifted from describing things (i.e., “the sky was blue with a few clouds”) to noticing things like reflected color or unusual light effects such as a halo of light on the edge of a tree line. One student even said that she felt the need for more words to describe all the things that she saw. After the film screening and light observations were completed I asked them to write a reflection essay about the assignment that also included listening and responding to a segment of TED Radio Hour in which cyborg anthropologist Amber Case discussed how our digital tools are a new iteration of tool making and how they extend us into a new realm that is both very useful and potentially detrimental to our well being. 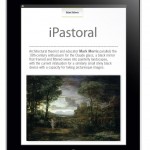 Unknown to the students at this time was how this topic would connect to the next one: William Gilpin, the concept of the “picturesque,” and the use of the Claude glass by artists and nature tourists in the 18th century. The students read Mark Morris’ essay “iPastoral,” in which he finds relationships between the image capture of the black mirror of the Claude glass and the black screen of mobile technology.[1]

I then asked the students to consider the picturesque as it relates our campus by learning about Frederick Law Olmsted, the landscape architect, by watching a recent documentary, Frederick Law Olmsted: Designing America, and reading Robert Smithson’s 1973 essay, “Frederick Law Olmsted and the Dialectical Landscape.”[2] Smithson, one of the founders of the earthworks/land art movement, called him the “ecologist of the real,” and considered him to be the first earthworks artist. Our campus was designed by Olmsted Brothers, the architectural firm run by Olmsted’s sons who inherited the business in 1898, and, while students have often heard the term “Olmsted design,” they frequently do not understand exactly what that means. Olmsted struggled to find a career that best suited him and also suffered from bouts of depression throughout his life. He understood from personal experience the benefits of spending time in nature and his thoughtful orchestrations of pastoral and wooded landscapes were designed for the betterment of individuals and society overall. My students expressed sympathy for Olmsted’s struggles and began to see our campus in a new way.

For the next phase of series of assignments I created several Claude glasses and assigned the students the task of using them to capture views of campus that reflect elements of traditional “good” landscape paintings based on a list we had created in a previous class meeting and to document those reflections photographically. They worked in small teams and I encouraged them to take photographs of each other to reveal how the images were made and also to experiment with image making. 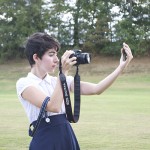 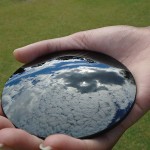 The teams took two weeks to complete the assignment and, after the last images were turned in, we devoted a class meeting to selecting a group of 20 images to be printed and exhibited in the university library learning commons. The collective curating was lively and I was impressed by their arguments for or against inclusion. Several students volunteered to edit and print the photographs using our department photo printers. Another group wrote the didactic text and presented it to the class for discussion and approval and I served as editor-in-chief. We collectively brainstormed a title for the exhibition and when one student said, “Oh, my Claude!” the class erupted into laughter and the search for a title was concluded. 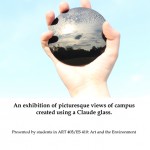 Through this multi-part assignment the students learned from conventional art history methods, but also from videos, podcasts, and physical experiences that took them outside into fresh air, sunlight, and green space. They worked individually, in small teams, and within a larger collective to produce a visual and textual experience that gave them the opportunity to educate a larger audience, primarily their peers from across campus and disciplines of study. 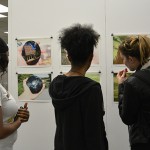 I concluded the project with a reflection essay assignment. Their responses were enthusiastic and they related to me how they appreciated the opportunity to learn in differing and what seemed to them more genuine ways.   The students were overwhelmingly positive about this aspect of the course and they strongly encouraged me to bring this type of learning into other classes.

Call for the Archive