On January 8, 2018 The Museum of Modern Art’s Digital Learning team welcomed to MoMA nearly 200 artists and their families and friends for the opening reception of the exhibition In the Studio: Art by MoMA’s Online Learning Community. The exhibition, the first of its kind at MoMA, features slideshows of artworks created by students in In the Studio: Postwar Abstract Painting, a massive open online course (MOOC) that our team launched on Coursera in March 2017. The course introduces learners to the materials, techniques, and careers of seven artists through weekly demonstration videos, slideshows, and other resources. As the Museum’s first studio MOOC, it invites learners to use the artists’ works as points of departure for making and sharing their own artworks in the discussion forums. 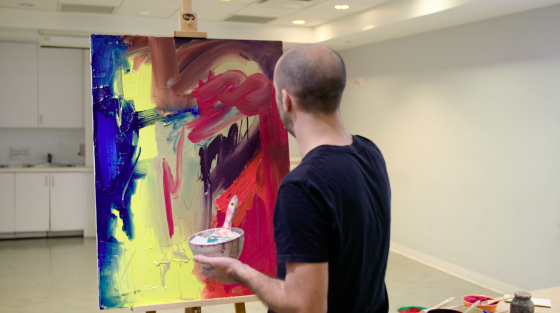 The course has proven to be very popular and engaging, leading to rich discussion forums that blend inquiry, feedback, and encouragement. Our team has been thrilled to observe exchanges between learners in which they offer constructive critique and praise for the composition, palette, or technique of each others’ artworks, or help another learner who struggles with a creative block in the studio. The discussion forums have developed into genuine and substantive online global communities that chip away at anonymity and isolation, two challenges posed by online learning.

We organized the exhibition to acknowledge and celebrate the creativity and achievements of this online community, and learners enthusiastically responded. An open call for images of artworks made in the course yielded submissions by 500 artists from around the world. All submissions were accepted and displayed in digital slideshows at the Museum from January 5-22. With the submissions came an outpouring of positive feedback for the course and exhibition that confirmed how meaningful the program has been to so many. A woman from Poland wrote, “I’m really happy that my image will be included in the exhibition. It’s really an empowering thing for the new year,” and another learner from Australia reported, “I really enjoyed the course and made some good contacts with artists overseas who still keep in touch via Facebook.” Of the course, a 70-year old woman from Australia wrote, “It has completely altered the way I view this kind of art… [and] it is also so good for America’s image worldwide of generosity, especially now.”

This is in no small thanks to the course instructor, Corey D’Augustine, whom many learners cited as inspiring them to return to the studio after years away, or to express themselves more freely. A learner from Wisconsin wrote, “Corey D’Augustine was one of the best instructors I have had. He was very clear and easy to understand. Not only did I learn, and retain, the information, but I truly enjoyed the classes.” Our team has built further on Corey’s ability to engage, inspire, and educate by continuing to produce “In the Studio” videos and Live Q&A sessions with Corey that are shared on MoMA’s YouTube channel and in the course. 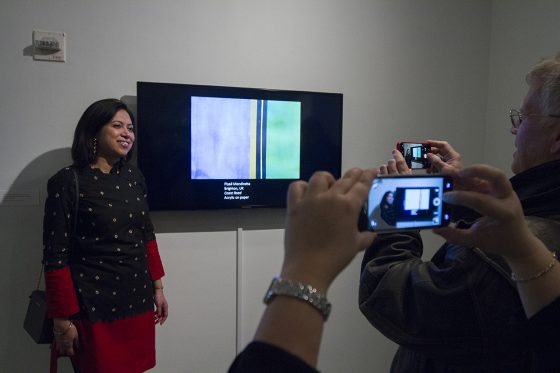 Corey was a big draw at the opening reception for the exhibition, but we were also so excited to see learners enthusiastically meeting one another and connecting faces to names that they recognized from the discussion forums. My favorite moment of the night came when Sara Bodinson, the Director of Interpretation, Research, and Digital Learning at MoMA, polled the audience on where they had travelled from to attend the opening reception. Many were from the New York area, but many had also taken a train or flown in from around the United States despite the freezing temperatures and snowy weather, some making their first trip to the city and to the Museum. Even more surprising, however, was the attendance of learners who had travelled internationally: from the Philippines, Canada, the United Kingdom, Spain, and Poland. Families and friends of learners who couldn’t be at the opening attended in their place, taking installation photos of the learners’ artworks on their behalf. 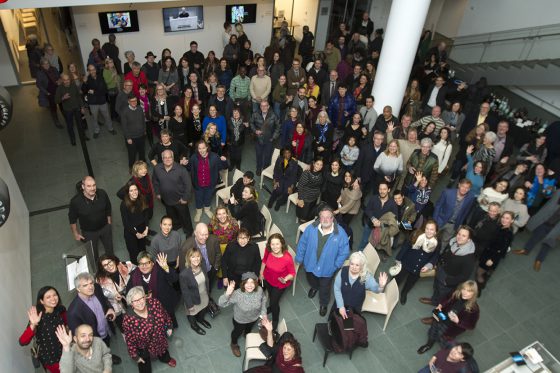 Learners reported that the course and exhibition have had a positive, even life-altering impact on them. And it’s had a similar effect on our team too. We know that as many jobs are lost to automation in the coming years, and as the cost of higher education continues to rise and make traditional universities even more unaffordable, online education will become even more crucial. Nesta UK predicts,

hundreds of millions of adults will also have to learn new skills, from handling digital technologies to more human skills like how to collaborate, communicate or create.

That’s where MOOCs that inspire creativity and community come in. Museums are institutions of learning, respite, inspiration, and social connection, but that doesn’t need to be limited to the in-person experience. Museum-based MOOCs and other digital learning opportunities connect people with the history of human creativity and invite them to tap into their own, as well as to draw encouragement, friendship, and support from others. One learner summed this up in her feedback: “[The courses] are an opportunity for people like me to develop our art horizons, ask new and bold questions to ourselves, and grow as human beings”—and, based on the experience of the In the Studio course and exhibition, I would only add to the end of her sentence the word, “together.”