Prehistory and Prehistoric Art in Europe

The lesson on Prehistory often comes at the very beginning of the semester, so offers the opportunity to introduce the activity of close looking as well as an historical overview of the very earliest art practices.

There’s a body of literature by educators on the practice of close looking and inviting personal responses from the students (Portland-based museum educator Mike Murawski has a great post on these topics here). You might use the Woman of Willendorf as the key image from which your lecture and discussion will stem for this class on Prehistory. You could use this class activity at the beginning of your class to get your students to look closely at the Woman of Willendorf in pairs (i.e. to practice the art historical skill of formal analysis) before then opening up the discussion to the whole class and figuring out her context together. Some easy first questions to open with after the activity are, “What did you see? What were the first things you noticed?” 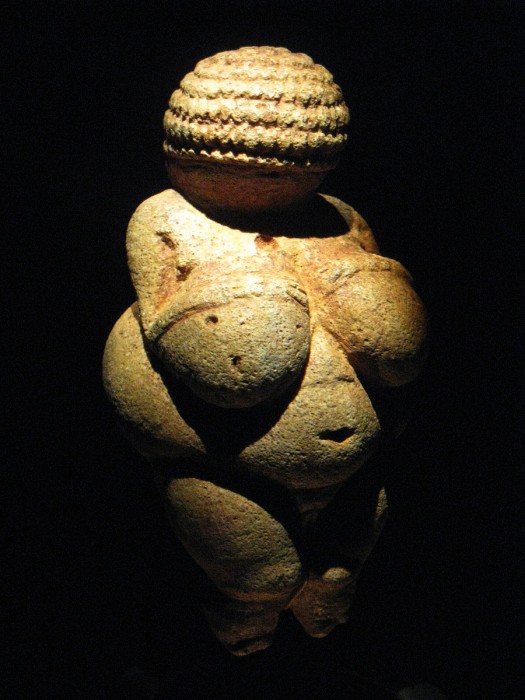 Background reading might include your survey textbook, this thematic essay from the Met Museum’s Timeline of Art History, and Smarthistory’s Prehistory section. There are at-home readings for students in the AHTR online syllabus.

There are some great video resources for this lecture, but perhaps nothing more melancholically beautiful than Werner Herzog’s Cave of Forgotten Dreams which is excellent for showing in-class clips of the Chauvet Caves in all their glory. The first few minutes of PBS Nova’s The Secrets of Stonehenge are great for showing Stonehenge in 3D, and the contemporary archeologists working there. Mike Parker Pearson is one of the leading authorities on the site and he leads the discussion here.

The term Prehistory refers to all of human history that precedes the invention of writing systems c. 3100 BCE and the keeping of written records, and it is an immensely long period of time, some ten million years according to current theories. For the purposes of an art history survey, we split our study of Prehistory into two camps: Paleolithic and Neolithic (old vs. new, nomadic vs. settled, “lithic” from the Greek for stone, as these peoples worked with stone tools). This is often a good time to discussion the differences between culture and civilization, the growth of which will become apparent as the survey progresses—and which can be problematized in terms of how your survey narrates the “development” of civilizations.

The timeline covered in this area of the survey is vast—c. 32,000 BCE (Chauvet Caves) to 7,000 (Neolithic settlements)—but the question that unites this vast chronology is simple and compelling: what can we find out about objects from so long ago, and how do they connect to our contemporary experiences today?

In an hour and fifteen minutes, this question can be investigated through many ancient objects, including:

An object like the Woman of Willendorf can tell us about how the female form was viewed culturally as this isn’t an exact replication of what we know homo sapien women looked like at this time. And although she’s been canonized in the art history survey, she’s really not that unique—many similar figures have been found from this era. Her body has been changed to accentuate certain characteristics. Why? Most of the figures from the “upper Paleolithic period” are women. Women bear children, and she seems well-nourished—this may have ensured the continuation of the community. She’s also a portable object. This makes sense as prehistoric communities were nomadic and needed to be able to carry their possessions with them.

The Lion Human (found in the German Alps in 1939) shares certain similarities with French cave wall paintings, which also show hybrid creatures. The French paintings, however, are several thousand years younger than the German sculpture. This sculpture was found with flutes near it, suggesting it was part of a musical ritual or tradition. (Contemporary artists Jennifer Allora & Guillermo Calzadilla’s ‘Raptor’s Rapture’, a work shown at Documenta 2012 in Kassel, Germany, includes a musician specializing in prehistoric instruments playing a flute just like this.) It’s the oldest known zoomorphic sculpture in the world, but as there are no written records left to us, the meaning and purpose of this art can only be guessed at. At the end of the Paleolithic era, there were perhaps over five million inhabitants of the earth.

Cave art is often hidden deep in cave formations, suggesting that it was intended for a privileged subset of people; this theory is similar to that of burial sites such as at Stonehenge where remains of men of a certain age are found. It suggests a society built on hierarchies, one that was structured and ordered. One of the first questions to think about is, how did prehistoric humans work and paint in deep cave formations that would have been pitch-black? They did so by using animal fat lamps (see, for example, the Lamp with Ibex Design). What materials were they using? Natural pigment derived from stone and plant, charcoal, and applied using their hands or rough brushes. Some archaeologists believe that pigment may have been mixed in the mouth and then spat onto the walls (see the archaeological reenactment of painting techniques slide). What was the purpose of the handprints on the walls? It’s unclear—were they signatures? Hand signals used while stalking prey? Used to signify the presence of humans in this animal world? Great examples of cave art include the Lascaux Cave, Le Tuc d’Audoubert, and the Chauvet Cave. Prehistoric cave and rock art was also produced in Australia, Malta (an island between Italy and N. Africa), and Algeria, among other sites.

There may be no one single “function” for these works—they changed over generations, over many thousands of years, so while some of their functions may have been passed down orally, these changed and mutated too over time. We can’t even be sure if the works are about the act of painting, or the finished images. Even within one generation, or a short period of a few generations, the cave paintings would mean different things to different people depending on their age, experience, perhaps their gender. We can only make educated guesses about what they were used for. However, the difficulty and time required to make the works meant they weren’t just for aesthetic pleasure alone. They could have been used for clan rites, as an initiation for younger (male) clan members. They may have believed to have had magical powers (i.e., showing a successful hunt could prefigure that happening in real life), the precursor to modern systems of belief and religion. However, as Herzog’s documentary points out, this theory has since been somewhat dismissed as further archaeological evidence suggests that the animals portrayed are not the ones that were hunted.

The Neolithic or Agricultural Revolution followed the Paleolithic Era, and it began in the Ancient Near East about 10,000 BCE. Not long afterwards, Neolithic settlements appeared in Europe, Africa, Asia, and the Western Hemisphere.  During the next 3,500 years, men and women all over the world radically transformed their relationship to nature, from a dependent one to more independent one.  This is a slow change—it didn’t happen overnight by any means. Human beings learned to manipulate nature, they invented agriculture, which allowed production of a food surplus, they manufactured new types of tools, and they domesticated animals, like dogs, sheep, goats, cattle, pigs, and so on.

Once a food surplus was produced, human beings began to live in fixed village settlements like Çatal Hüyük, in Turkey (7400–6200 BCE). Humans began to develop more lasting ties to specific sites and places. Innovations of the Neolithic era included a division and specialization of labor, the emergence of an artisan class, such as weavers or potters, the development of trade, the invention of private property, and the development of basic political and social institutions.

Neolithic people also created impressive megalithic (“massive-stone”) constructions, such as Stonehenge. Stone was used because of its durability (think of the words or phrases like “written in stone”). Stonehenge uses post-and-lintel construction techniques, and the technology used to lift, transport, and maneuver the massive stones is still the subject of much discussion by archeologists today.

Next came the Urban Revolution (Mesopotamia and Egypt, from about 3,500 BCE.  This “urban revolution” formed the symbolic boundary between “prehistory” and “history” as the first writing emerged from the Fertile Crescent, today Iraq. For many, this is the moment that mankind invented “civilization.” 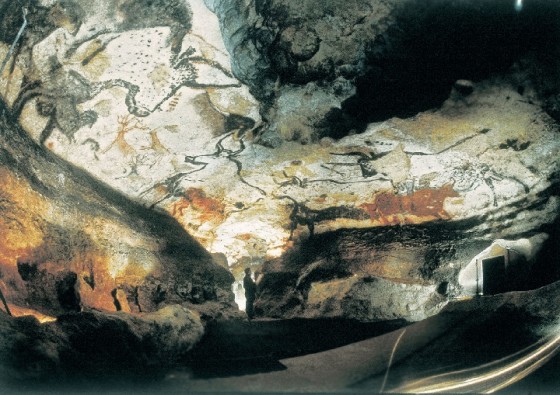 At the end of class, for a low-stakes, get-them-looking-and-responding homework assignment, you could ask students to pick a four-minute story from the Met’s Connections website where Met staff—from curators to technicians to educators to admin staff to interns—talk about their favorite works in the museum.  You might also use their 82nd and Fifth series where the focus is one artwork and one curator. Introduce the websites in-class at the end of the lesson. Next lesson, the students should come prepared with “talking notes” (ie. one very short paragraph they can refer to if called upon in class to share, and can be handed in to you at the end of the lesson). Ask them to think about what personal connections the narrator of their chosen video makes with the objects they talk about. What is the theme that connects their objects? Why did you choose this video? What new things did you learn?

Alternatively, another low-stakes writing assignment might ask students to read or listen to any of the entries on the BBC/British Museum collaboration A History of the World in 100 Objects related to Prehistory. These include the Olduvai Stone Chopping Tool and the Hand Axe, both close to 2 million years old. Your “reading response” take-home hand out might look a little like this.

Finally, this class might be the time and place to introduce a collective timeline project (if you’ve chosen to include it in your syllabus). Check out this post on using Tiki Toki to have students collaborate on a timeline over the course of the semester, and produce presentations related to survey objects.

Michelle Millar Fisher (author) is a co-founder of Art History Teaching Resources (AHTR) and a PhD Candidate in Art History at the CUNY Graduate Center. She’s been a part-time faculty member at Parsons The New School for Design and an adjunct lecturer at Baruch College. From summer 2019, she is the Ronald C. and Anita L. Curator of Contemporary Decorative Arts at the Museum of Fine Arts, Boston. She was previously the Louis C. Madeira IV Assistant Curator of European Decorative Arts and Design at the Philadelphia Museum of Art, and a curatorial assistant in the Architecture & Design department at the Museum of Modern Art, New York, where she co-organized such exhibits as Design and Violence and This Is for Everyone: Design Experiments for the Common Good. She first came to New York to work at the Guggenheim Museum, where she developed her love of all things art and pedagogical.