The Rare Experience of Punctum

When I wrote the curriculum for the Arts in NYC course that I am currently teaching at a community college in New York City, I wanted a concept to guide it. I have written before about two amazing professors from my undergraduate experience who largely formed how I study and experience all forms of art: Carol Mavor and Elin o’Hara slavick are the foundation upon which I have built the key concept of this course, Roland Barthes’s terms studium and punctum.

I am not sure which course/professor brought Barthes’s text Camera Lucida into my life, but thank you. I return to this book again and again. As a community college professor, I look for texts that are approachable in reading level but that have concepts to bolster critical thinking. Camera Lucida does just that with its blend of narrative storytelling, photograph description, and philosophical terms and analysis. We read from this book on Day 1 of class and define studium and punctum collaboratively on the white board.

According to Barthes, studium is: “a kind of general interest, one that is even stirred sometimes, but in regard to them my emotion requires the rational intermediary of an ethical or political culture. What I feel about these photographs derives from an average affect, almost from certain training. I did not know a French word which might account for this kind of human interest, but I believe the word exists in Latin: it is studium, which doesn’t mean, at least not immediately, “study,” but application to a thing, taste for someone, a kind of general enthusiastic commitment, of course, but without special acuity. It is by studium that I am interested in so many photographs…” (p. 26).

Of course, we must do a close reading of this to pull apart words the students can attach to: study, interest, average, culture, polite interest. Other pages in the book explain that studium isn’t necessarily a like/dislike (or it might be), but a drawing of the viewer into the photograph by some sort of some cultural tug. We talk about our backgrounds (ethnicity, religion, parents) and how these elements of our identity add to how we “read” a work of art and react to it.

On the other hand, you have punctum: “it is this element which rises from the scene, shots out of it like an arrow, and pierces me” (p. 26), “for punctum is also: sting, speck, cut, little hold–and also a cast of the dice. A photograph’s punctum is that accident which pricks me (but also bruises me, is poignant to me)” (p. 27).

Words related to punctum found by the students were: punctuation, sensitive, wounds, emotion, loving. Punctum says something about your emotional self; it speaks beyond your cultural, trained self. Punctum can be something small in a work of art (a hand, a dress, an eye) or it can be the entire work, but it is as if you have been punched by emotion.

While teaching these concepts, I recall my first experience of punctum. It was a photograph of three girls. Maybe they were 10, 11, 12? They were wearing bathing suits and standing in an awkward triangular cluster eating ice cream from the ice cream man–a Pac Man ice cream stood out to me. Also, I had owned one of the girl’s bathing suits! Looking at that photograph was like looking backwards in time in a mirror, and I had this punch of terrifying realization that my childhood was so long over that it had already been documented by someone, somewhere else, with some other kids. I felt violated, cheated of time, and stunned that I was an adult (I was maybe 21?).

I explained to my class that punctum is rare, but when it hits you, you know it. I also admitted that I hadn’t experienced it from a work of art in such a visceral way since that experience in undergrad.

That was true, until last week when our class went to MoMA.

At the end of our two hours in the museum, I was wandering around on the 3rd floor looking at the very contemporary art. I had been walking with a student, Raul, but we had split up. And then I came into a room and saw these: 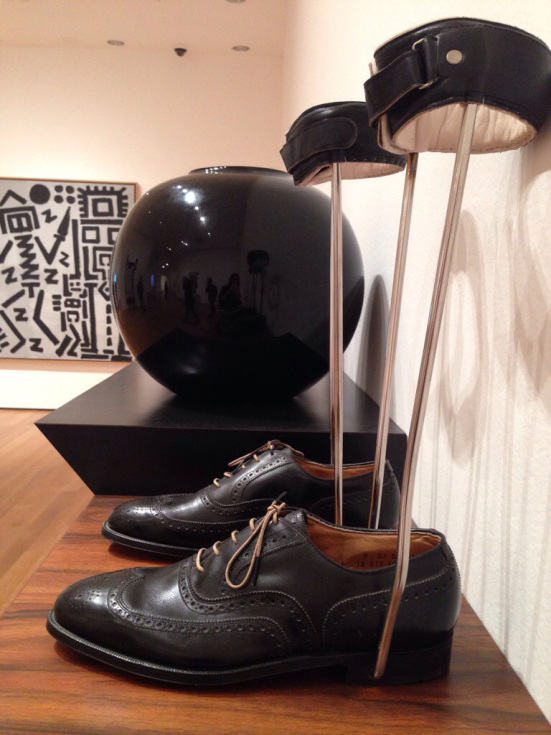 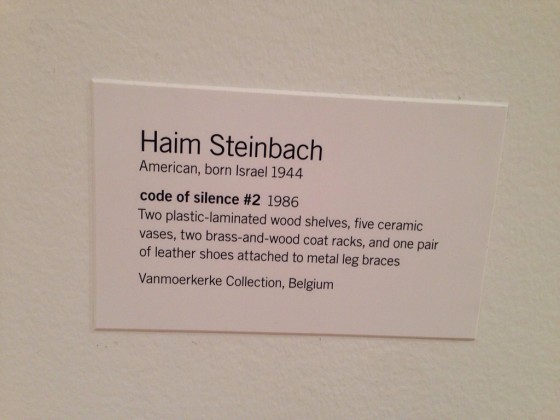 And I was slayed. I immediately started crying. My father suffered from a life-long battle with diabetes and died when I was almost 22 years old. For a long time in my life he wore shoes like these. Diabetes is a horrible disease; it ravages your body bit by bit. My dad had very little control of his feet and hands, and when he walked his feet flopped like dying fish at the end of his ankles. These braces kept his feet at a permanent 90 degree angle to his body and supposedly gave him more control and helped him fall less when walking. He started to lose control of his legs when I was 8 years old, I remember it clearly. I overheard my mom and my Uncle Bob talking in secret on a Myrtle Beach vacation, and soon after these shoes appeared. They squeaked horribly. They caused bloody sores around my dad’s calves, where his skin was like tissue paper and of creamy white, pink, lavender hues and gashes of red or brown, dried blood from the braces. They were a labor to put on and to take off. When he wore them with shorts I was shamefully embarrassed. They are an unforgiving relic of my childhood.

I haven’t seen those shoes in years. Once my dad retired he refused to wear them anymore; they left our family’s life when I was 16 but they hold so many sad, mad, and frustrated memories. When I saw them in the museum I felt like someone was playing a prank on me–a f*cked up version of “This is your life!” to catch me off guard. I started to cry and then anxiously looked around to make sure no students were in the gallery. I knew if I had to explain my tears I’d start blubbering, and I didn’t want to do that.

I shot some images of the strange sculptural use of my dad’s shoes and the dreaded artist who forced me to experience punctum for the first time in ages, and I walked as quickly as possible out of that gallery.

That, my dear students, is punctum.

One response to “The Rare Experience of Punctum”