Renaissance “Chopped”: Mixing the history of food in Renaissance Italy and  food competitions

Renaissance “Chopped” is an in-class activity that can be adapted for courses at all levels of art history and is appropriate for both majors and non-majors in the discipline. While it works best with 6 or 7 groups, it is also appropriate for smaller seminars.

My students came up with the topic that led to the creation of Renaissance “Chopped.” I first introduced it in an upper-level seminar limited to art history majors, but have since included it in a lower-level course that enrolls students across campus.

Renaissance “Chopped” filled one of four courses periods (of 30) that I set aside for longer active learning activities. While I had plans for three of those classes, I left the final designated period, during the last week of class, unplanned so that the students could participate in the course design. When asked to decide on a topic, several drew from their personal interests in cooking and baking and requested a day-long exploration of Renaissance food. In this way, the students were the most important ingredient in the creation of Renaissance “Chopped.”

Once the students determined the subject, I set out the following goals for the activity:

Timing: Minimum of 50 minutes (could be a full class period or just part of one)
Note: No cooking required

“Chopped” is a popular Food Network show; each episode opens with four contestants and includes four “rounds” of competition: appetizer, main course, and dessert. In each round, the cooks receive the same “basket” ingredients which they are required to use in a dish. In addition, the cooks have access to a fully-stocked pantry in the Chopped Kitchen. After each round, a panel of three experts judge taste, use of the “basket ingredients,” and plating. Together they decide which individual to “chop” in every round; the finalist at the conclusion of the dessert round is named “chopped champion.”

Although based on the Food Network show, Renaissance “Chopped” does not actually involve cooking and the students do not work with real ingredients. Instead, the popular cooking show provides an entertaining framework for learning about Renaissance food between 1450 and 1472 with particular emphasis on the d’Este court in Ferrara.

As in the Food Network show, the groups may use items from the Renaissance pantry. Based on the resources discussed below, students receive a list of items they might find in a fifteenth-century Italian court panty as well as a list of “off-limit” items that would not have been available before contact with foods from the Americas. In order to broaden the students’ knowledge of Renaissance foods, each group works with a different basket of ingredients, each including a protein, fruit, grain, vegetable, spice, and oil.

The assignment asks each group to imagine a single main course (or multiple courses depending on the amount of time allotted) suitable for presentation and consumption at the d’Este court. Groups are given 25-30 minutes to research ingredients, brainstorm, as well as both illustrate their vision and describe it in writing.

At the conclusion of the work time, each group gives a mini oral presentation; they list the required basket ingredients, then share their sketches, and describe their vision. As in any food competition, “plating” and “presentation” counts in this context and the students imagine lavish meals.

Renaissance “Chopped” provides an excellent opportunity for the students to learn more about the centrality of food to fifteenth-century Italian courts. I start the designated class period by sharing what scholars know about food at the d’Este court in Ferrara in the second-half of the fifteenth century. This information draws heavily from Giovanni Bosi, Anna Marai Mercuri, Chiara Guarnieri, and Marta Bandini Mazzanti’s 2009 article in which the authors examine the archaeobotanical data from the Vasca Ducale (or Ducal Pit) and compare the findings with both the Salone dei Mesi frescoes in Palazzo Schifanoia and a nearly contemporary cookbook written by Christoforo da Messisbugo, chef at the court.

This pit, which was covered over during a renovation in 1479, includes zoological and plant remains that the authors note come from food waste and floor sweepings. Included in the article is a comprehensive list of food items excavated in the Vasca pit as well as from other refuse sites in Ferrara. In addition, there is evidence of Renaissance weeds which now are endangered wild plants.

The authors conclude that the excavation of the pit recovered certain items–like desi chickpeas, cilantro, and table olives–likely introduced to Ferrarese cuisine by Eleanora d’Aragona, wife of Ercole I de’Este, who came to the court from Naples. The archaeobotanical remains also indicate that those dining at the Ducal table enjoyed some foods, like apricots and pink, not consumed by others of lower rank; in addition, the fruit/seed morphology suggests that the highest quality fruits were harvested for the ducal table.

Based on the lists of items in the Vasca Pit, conclusions drawn about Ferrarese cuisine, and information from broader studies of Renaissance food, the basket items the student receive include combinations of the following items:

Olives: used for oil and eaten whole at the table

In addition to introducing the specifics of dining at the d’Este court in Ferrara, we also discuss the food in Italy before contact with the Americas more broadly.  Finally, I show the class a couple of illustrated pages taken from a manuscript recording festivities in the coastal town of Pesaro (in the Marche) organized to celebrate the marriage of Costanzo Sforza and Camilla Marzano d’Aragona at the end of May 1475. Folio 77v depicts the god, Silenus, and the author mentions the sweet wines and twisted sugared wafer enjoyed by attendees, and describes the “triumphal chariot made wholly of gilded sugar” upon which sat a figure of Justice holding sword and scales. The author notes that the god had an antique vase with gilded cloves, almonds, hazelnuts, cinnamon, oranges, pine seeds, quince marmalade, and more. At the conclusion of this discussion and inspired by reading the descriptions, the students turn to their basket items and to the assignment.

Because many of the food ingredients are unfamiliar to the students,  I first used Renaissance Chopped as an excuse to prepare a variety of dishes to share during the final exam period. Those dishes featured millet, fennel, and pomegranate so that the students could taste new foods. 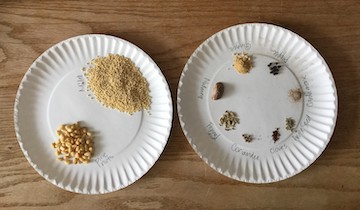 When I did the activity most recently, rather than bring in prepared dishes, I provided the students with lists of pantry items and pictures, brought in a few raw samples, and encouraged them to read about the ingredients using their digital devices. I also brought examples of the spices so they could smell the aromatics. However, most students preferred reading about the ingredients and didn’t engage with the samples as I’d hoped.

In both iterations of the assignment to date, the students were engaged and were able to present sophisticated visions for their meal. I felt it was more successful in my lower-level class because of the increased number of students, which included studio art and design majors in addition to art history students. I also provided more visual and contextual information, and the students spent more time learning about the different ingredients online, came up with much more elaborate drawings, and provided more in-depth descriptions of their food. Another change was to move the assignment to a class period nearer to midterms when the students were beginning to burn out. The change in the pacing of the class, the shift in the content, and the time set aside for creative activity and collaboration helped revive the energy in the classroom.

Now I am considering how to revise the activity for a short-term education abroad setting.

Freedman, Paul. Out of the East: Spices and the Medieval Imagination. New Haven and London: Yale University Press, 2008.

Student Voices: A Conversation about Collaboration

2 responses to “Renaissance “Chopped”: Mixing the history of food in Renaissance Italy and  food competitions”