The first meeting of BHQFU’s Radical Pedagogy Working Group, held a few Wednesday evenings ago, centered on aims for the spring. What did we want from this investigation of art teaching? Some wanted support and solidarity, others preferred arguments, some looked for inspiration, and others for concrete strategies.

I hadn’t formulated particular aims for the workshop, but my interest came from the division that exists between art and art history, and a thought that paying attention to education in art schools could serve both as a means of thinking about the art historian’s relationship to visual material and as a means of provoking more experimentation and radical methods of teaching within art history. There are boundaries between art and art history that often don’t make sense. I’ve met art historians who have never met any artists and print specialists who have never made prints, and some universities with strong art history programs do not offer any practical art education – and yet art historians can teach history in art schools, and the two groups often work together outside the university setting. 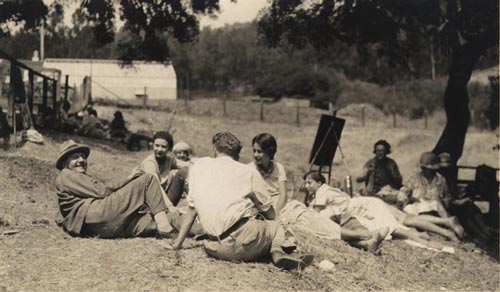 Hans Hofmann at the Chouinard School of Art, Los Angeles, 1931

Most of those at the Radical Pedagogy Working Group’s first meeting were artists and teachers of art, in settings ranging from public primary schools to private graduate schools. Many of the concerns that arose in the discussion were shared amongst these different groups, and of relevance to both artists and art historians. There was a lot of discussion about negotiating relationships between people, which is really a crucial task when teaching in any discipline, and about non-hierarchical spaces, which seemed to appeal to most of those in the room.

But how to translate theory into practice? Some worried that students didn’t actually respond well to attempts – such as leaving the chairs at the side of the room, allowing students to be involved in the structuring of the classroom as a space – to challenge the teacher’s privileged position, while others wondered if being clear about intentions – explaining why the chairs were at the side of the room – would be an effective compromise. One participant raised the possibility that methods that challenged established practices would always result in awkwardness, and that it was necessary to work through this phase, while others wondered if non-hierarchical spaces were a strategy or an end in themselves, and how this shaped the way we thought about power in the classroom.

But focusing on theory, divorced from content, can result in circular discussions, and more questions than answers. Jarrett Earnest, facilitating the session, had assigned readings focused on artists as teachers as a means of ensuring that art remained central to the investigation, and is inviting artists with teaching practices to present their own methods at the weekly meetings. Josephine Halvorson began her presentation by taking Hans Hofmann, on whom the week’s readings were focused, as a starting point for examining her own teaching strategies. 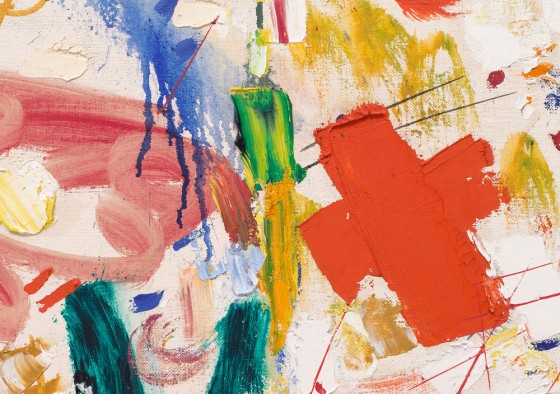 This presentation brought out a focus on place that’s sometimes lost in examinations of contemporary art teaching. Halvorson spoke of Hofmann’s relationship to Providence and the way in which outdoor environments were central to his teaching practice and in his writing, but are sometimes lost in examinations of his own work and that of his students; Hofmann’s rhetoric, drawn largely from post-impressionist Europe, became a form of justification for the New York School. Halvorson moved on to speak of how the environments in which artists learn and work are often very different from the galleries and collectors’ homes in which they aspire to show their art, and looked at techniques she had used to engage her students with spaces set apart from urban marketplaces and from New York. I thought of the multiplicity of spaces in which art making takes place a few days later, when I heard an art historian giving a tour suggest that “we’re always in architecture when looking at art” – Halvorson’s discussion served as a useful reminder of the different environments in which artists and art historians often see artwork. This awareness of spaces as contingent and culturally constructed, rather than given, could also provoke thoughts in art historians on ways in which we can encourage students to look critically at institutions – such as museums and auction houses – to which they aspire or expect to work after graduation.

The Radical Pedagogy Working Group is itself a kind of class, with readings and a leader, and so models a style of teaching that’s simultaneously up for questioning. Jarrett mentioned, in a discussion of how instructors could or should construct alternative canons for their students, that he had seen this course as an opportunity to create a kind of canon of artists as teachers, including Anna Halprin alongside Joseph Beuys. One participant asked why the syllabus was so white and so male; another questioned Jarrett’s deliberate exclusion of texts that weren’t by practicing artists.

We spoke also of the problems with education as a transaction, and the way in which hope for particular outcomes can get in the way of learning. We hadn’t settled on a list of aims for the workshop by the end of the class, but the disagreement seems promising.

Reacting to the Past in Practice