Scene: a low lit classroom filled with sleepy students mindlessly swiping at their phones and numbed by the hypnotic hum of a projector. Enter the professor, expected to perform, to teach, dare I say entertain. But how can we enliven this familiar weekly song and dance? Perhaps with a song? Or maybe a mixtape?

Starting three years ago, I began playing music at the start of some lectures in my course on contemporary art. Charlie Parker served as a prelude to Pollock, or John Cage worked as a lead in to Johns and Rauschenberg. I recognized quickly that students were showing up a bit earlier, expecting to hear something, questioning my song choices, and wanting to know more. Thus, I set out to curate a sort of eclectic soundtrack for the course, using music as an introduction to all my class lectures. While my initial goal was simply to enliven the classroom experience, but I’ve also come to realize that playing music helps students to better understand the work and ideas under examination.  Today I’d like to outline some of the ways in which I made choices for this classroom soundtrack, how I solved issues with access and content management, and how my findings and relative successes run parallel to the available resources on music as a pedagogical tool. 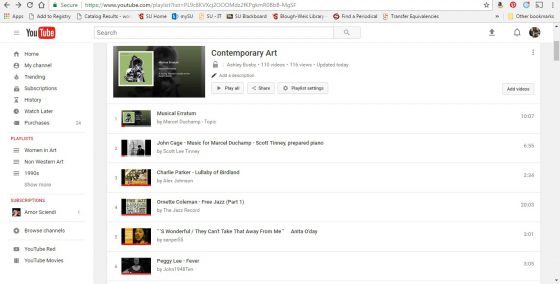 As I worked to build my mixtape playlist, some songs and artists were an obvious match with lecture content. While many students were not familiar with the band, The Velvet Underground and Nico served as a perfect soundtrack for a discussion of Warhol and Pop, allowing for an extended discussion of the artists’ work beyond the iconic soup cans. Songs by artists also featured heavily. These included Pussy Riot’s Kill the Sexist, Laurie Anderson’s O Superman, and Ai Weiwei’s Dumbass, not to mention John Baldessari’s ode to Sol LeWitt’s Sentences on Conceptual Art.

Matching music to other lectures took a bit more creative thinking not to mention a quick crash course in the history of later twentieth-century music. Rousing, anthemic tracks from Aretha, Beyoncé, and Bikini Kill accompanied a lecture on feminist art. I came to know and love minimalist composers including Steve Reich and Terry Riley; my students felt as though listening to Riley’s In C was some form of torture.  For a lecture on the YBAs, the playlist featured not only mid-nineties shock rock but also catchy Britpop. Tracks such as Nine Inch Nail’s Closer and Marilyn Manson’s Beautiful People matched well with the outrageous tactics of Damien Hirst and his compatriots; hits by Blur (for whom Hirst directed the music video for their 1995 hit Country House), Oasis, and Elastica helped embody this era of British culture.  For a lecture on the 1980s Culture Wars and censorship of work by Mapplethorpe and Serrano, I chose to juxtapose instances of artistic censorship to similar contemporary events in popular music. I began by highlighting tracks from the so-called Filthy Fifteen, those artists targeted by the Parents Music Resource Center in a series of 1985 senate hearings that eventually resulted in the creation of the Parental Advisory labels for album sales. Students recognized songs such as Cyndi Lauper’s She Bop, Twisted Sister’s We’re Not Gonna Take It, or later targets of music censorship such as N.W.A.’s Fuck Tha Police and were able to make connections to work from Mapplethorpe’s X Portfolio  and Serrano’s Piss Christ. 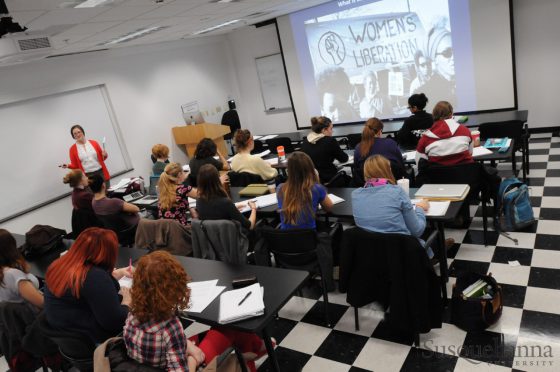 While much of the work involved in using the mixtape involved considering what tracks to include as a match to each day’s lecture content, issues of student access and how to house the playlist also presented some issues.  You Tube, while still certainly problematic, became the default solution.  The site supports the creation of playlists and allows users to keep those lists public, private, or shared. By selecting the shared option, I could make the list available to students, simply by sending them the link or including it on the class course management site, but I didn’t have to worry about commenters and the unwanted input of the internet masses. There are, however, ads to contend with.

And, copyright certainly comes into play as well. I’ve often had to update my playlist to account for deleted videos and some artists are notoriously difficult to access on YouTube, particularly the Beatles (I had hoped to play Sgt. Pepper’s Lonely Hearts Club Band as a lead in to the International Group and Pop art’s origins in 1950s Britain). In the future, I plan to collaborate with our campus educational technologist and explore the possibility of a campus subscription to a streaming service to better account for such issues. Nonetheless, You Tube’s user-friendly interface not to mention the sheer number of available videos made it the best platform for this pedagogical experiment.

After running this experiment in pedagogy, I wanted to know more about how others might be using similar tactics in the classroom and what the available research suggests about such practices in the college classroom. Dr. Susan Hallam, a specialist in music education, provides an excellent overview of the available studies on music and its impact on student learning processes and general well-being in her 2015 article “The Power of Music: Its impact on the intellectual, social and personal development of children and young people.” While most of the cited studies examined elementary age children, research does suggest a positive correlation between music and the development of self- identity in late adolescents and as such can have a positive effect not only on personal issues such as mood regulation and sense of belonging but also a greater sense of overall community amongst a peer set. Such studies support my own notions of creating a sense of classroom community through the introduction of the class mixtape.

In an article for the Yale Center for Teaching and Learning, Christy Thomas notes the relative absence of literature on the pedagogical benefits of “employing musical examples when teaching broader concepts” despite a wealth of studies on the benefits of music in elementary and secondary education. Thomas rightly sees music as an additional text, that when encountered critically and attentively, can provide a range of benefits for learners and teachers alike. Educators Nicholas Ferroni (a historian) and Natascha Chtena come to similar conclusions about encouraging student engagement and understanding with music in blog posts on education and pedagogy for the Huffington Post and Grad Hacker (sponsored by Inside Higher Ed) respectively. In an article for the journal New Horizons for Learning, Chris Boyd Brewer further outlines the many ways music can contribute to learning including use as a concentration aid and as a means to create an atmosphere. Most interestingly, Brewer also contends that music can contribute to a shared sense of community. This, I feel, is the greatest benefit to the mixtape. In line with Thomas’ notion of the textual function of music, these tracks serve as one more course reading intended to stress historical moments not to mention shared tactics—both compositional and stylistic—between aural and visual artists. But, the shared experience of listening with my students has been the greatest boon of the mixtape. For so many students, music is their livelihood. They wander about campus enshrouded in the sounds thumping forth from their ear buds. Now, however, upon entering the art history classroom, many remove their headphones to listen, to pause, and to quietly engage. Just last December, two students came in for a rescheduled exam. They asked if they could play La Monte Young and Marian Zazeela’s Dream House 78’ 17” as they composed their essays, an album I featured as a prelude to a lecture on Fluxus.  At that moment, I knew I had struck a chord.

Going to LA? Don’t forget to sign up for CAA’s SoTL Bootcamp!

6 responses to “The (Contemporary) Art History Mixtape: Setting the Tone in the Classroom with Music”